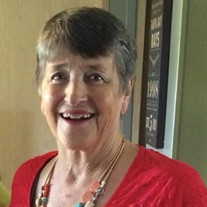 Frances Marie Martin Hays was born on July 13, 1936 to the parents of William Gordon Martin and Jewell Marie Kendrick Martin, (both deceased). She was born in the home of her mother's sister, Mary Kendrick Burtz in Plant City, FL. She was one of 8 children, Betty Griffin (deceased), Gordon Martin (deceased), Larry Martin (deceased), Ernest Martin (deceased), Eloise Clements (deceased), Roy Martin (deceased). She is survived by her sister, Vera Venning. Frances graduated high school form Turkey Creek High School in 1955. She married Lemuel Leon Hays on June 17, 1955. They were married for 59 years until his death on September 14, 2014. They had two children; Ruby Elaine Hays, Shearer Kennedy and Leon Jefferson Hays. Together they gave her 7 grandchildren, Katie Lynn Hays Chatterson, Sarah Jean Hays Lynn, Cheryl Lee Hays June, Alyssa Marie Hays, Jefferson Tyler Hays, Jason Dwayne Shearer, Jonathan Thomas Kennedy. She had 7 great grandchildren, Alyssa June, Leah June, Broc Shearer, Victor Campbell, Luca Shearer, River Kennedy and Zaiden Hunter Kennedy. Frances was a christian and raised her children up in the church. She attended Westside Baptist Church where she taught Sunday School, sang in the choir and was member of Westside 5 quintet. She later joined New Home Baptist and was active in the choir and "Under the Tree" ministry. Frances worked for a little while at Publix store in Grove Park and at Ross of Florida as seamstress, until her back could not handle it anymore. She became an Avon Representative and achieved sales award called "Presidential Awards". She loved crochet, and would make dolls and Barbie doll clothing and sell them on the street. You may have seen her on 92 West by Silver Moon Drive In. Frances also enjoyed camping and traveling, but her love was fishing! She was very competitive with her fresh water fishing. Many weeks she spent on Lake Arbuckle, Lake Placid and State Parks. Frances loved her family! She fought hard to carry on the tradition of having family get together's with her siblings and nieces and nephews. Then her grandchildren came along and her joy came from them. Then her great grandchildren she enjoyed giving them "sugar" all the time, and making them laugh. Frances suffered from back and neck injuries, developed severe debilitating arthritis to neck and shoulders. Her health rapidly declined after her pacemaker surgery in March 2019. She became weaker and was bed bound the last 2 months. She finally went home to be with the Lord and to her husband on September 5, 2020 at 9:40 pm, peacefully with her family at her bedside. She is now resting without pain in the presence of her Jesus.

Frances Marie Martin Hays was born on July 13, 1936 to the parents of William Gordon Martin and Jewell Marie Kendrick Martin, (both deceased). She was born in the home of her mother's sister, Mary Kendrick Burtz in Plant City, FL. She was... View Obituary & Service Information

The family of Frances Marie Hays created this Life Tributes page to make it easy to share your memories.

Send flowers to the Hays family.