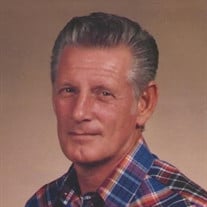 Eugene L. Anderson, Sr., known as Gene, Daddy & Papa, was born September 7, 1942 in Montour Falls, New York. He passed away at Lakeland Regional Health on September 3, 2021. Gene moved to Florida with his family when he was 15 years old. He married the love of his life, Reba Anderson on April 21, 1967. They were married for 54 years. He had a love for racing for over 60 years. It all started with stock cars with his brothers in his early years. Later, Gene, Reba and his boys Rinky & Ritchie started racing go karts, and after many years, progressed to Super Late Models. Gene was the motor builder, a big supporter, and their number one fan. Gene was always involved with helping his boys and then all his grandchildren with racing. Every one of them have had a Papa built motor. Gene's love for his family was unconditional. We are honored to have had such a wonderful person to be a part of our life. We will miss him dearly and pray one day we will see him again. He was preceded in death by his parents, Elaine & George Anderson; and brother, Ronnie Anderson. Gene is survived by his wife, Reba Anderson; son, Eugene L. Anderson, Jr. "Rinky" and daughter in law, Andrea Anderson, son, Ronald Anderson "Ritchie" and daughter in law, Robin Anderson; grandchildren, Brandon Anderson and wife Destiny Anderson, Matthew Anderson and fiance Kaylee Litteral, Alexa Anderson and Kendall Anderson; great grandchild, Harper Anderson; brothers, Jimmy Anderson, Charles Anderson and Gary Anderson; sister, Dawn Hartsuff. Graveside services will be Friday, September 10th, 2021 at 10 AM at Oak Hill Burial Park, 4620 US Hwy 98 S. Lakeland, FL 33812. Flowers can be sent directly to the graveside the morning of the service.

Eugene L. Anderson, Sr., known as Gene, Daddy & Papa, was born September 7, 1942 in Montour Falls, New York. He passed away at Lakeland Regional Health on September 3, 2021. Gene moved to Florida with his family when he was 15 years old. He... View Obituary & Service Information

The family of Eugene L. Anderson Sr. created this Life Tributes page to make it easy to share your memories.

Send flowers to the Anderson family.