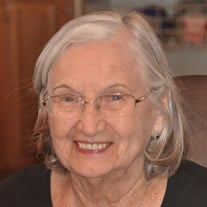 On Saturday, April 23, 2022, Eubie Foust, passed peacefully at 99 surrounded by family. Eubie was born in Chad, Kentucky on January 27,1923, to Grant and Sarah Dixon. She graduated from Morehead State to become an elementary school teacher until retirement. Eubie lived an incredible life. She was born at home and then lived in a converted box car provided by L&N Railroad, her father’s employer. A violent feud between two neighboring families caused her father to move to Laurel County, Kentucky to avoid taking sides. He bought a farm where they lived in a small house with no electricity or running water. Cooking and heat were by coal. Vegetables, from a large garden, were eaten fresh or canned for winter. Chicken and pigs supplied meat. Cows supplied milk and butter. A tobacco cash crop provided much needed money for the family of nine during the great depression. She was very bright and graduated from Hazel Green High School at 15. During World War II she worked at a defense plant in Detroit. After receiving her teaching certificate, Eubie and a girlfriend taught school at a coal mining camp in Lake City, Tennessee. This is where she met Paul Foust, a dashing, recently discharged Marine, on a blind date at a bowling alley. There were sparks and they hit it off, but she found a position teaching in Dayton Ohio and moved. Paul was passing through Dayton on the way to Detroit looking for work. He looked up Eubie, and never left. They married in Dayton on September 19, 1947. He was the love of her life. They had one son, Robert Paul Foust. Eubie and Paul moved to Lakeland in 1979 to enjoy retirement. She loved to travel, read, paint, volunteer, garden, and would never leave the nursery without something to plant. She taught adults to read, sorted clothes at a homeless shelter, volunteered at a nursing home, and at her church. For her 80th birthday, she went to the Grand Canyon and was overwhelmed by the majestic beauty. She also visited Italy, France, England, Greece, Israel, Egypt, and Turkey. Her favorites were Rome and Israel where she waded in the Jordan river. Eubie is survived by two sisters Norma Jean Gribble and husband Charles, Imogene Johnson, son and wife Robert and Janice Foust, grandson and wife Kevin and Abby Foust, and great grandchildren Tessa and Maddox Foust. She was predeceased by brothers Warren, Warden, Grant Jr, and Norvin. Eubie was buried next to her husband Paul at Oak Hill Burial Park in Lakeland Florida. Everyone lucky enough to know Eubie thought she was the sweetest, kind, gentle, polite and loving person they ever met. She will be missed.

On Saturday, April 23, 2022, Eubie Foust, passed peacefully at 99 surrounded by family. Eubie was born in Chad, Kentucky on January 27,1923, to Grant and Sarah Dixon. She graduated from Morehead State to become an elementary school teacher until... View Obituary & Service Information

The family of Eubie Foust created this Life Tributes page to make it easy to share your memories.

Send flowers to the Foust family.