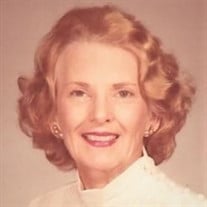 Dorothy Frick Brenner died Friday, March 11, 2022, at her home in Lakeland, Florida. She was 97. Born Sept. 30, 1924, in Erie, PA, Dorothy Elizabeth Frick was the older of two children of Clarence Henry Frick and Anna Kuhn Frick. At an early age Dorothy – then called Betty – studied dance and gave dance recitals. She began studying piano while living in Derry, PA, and continued when the family moved to Warren, PA. Dorothy graduated from Warren High School in 1942 and graduated from Syracuse University in 1946, majoring in illustration and art, and shortly thereafter married Benedict “Bob” Brenner. Throughout her life, she remained artistically creative and generous. Her many paintings and drawings adorn both her home and the homes of her grandchildren. Dorothy and sons Henry Craig Brenner and Daniel Clair Brenner lived with her parents and sister, Carolyn, in Warren. Upon the retirement of her father in 1957, she and the extended family moved to North Miami Beach, FL. Dorothy decided to teach elementary school, and attended night and summer classes at Barry College and the University of Miami to become certified in elementary education. Dorothy taught at Parkway Elementary in Miami for 22 years, where she was chosen “Parkway Teacher of the Year” during her final year of teaching. A member of Alpha Delta Kappa, she represented the group as a model at annual ADK spring fashion shows at the DuPont Plaza Hotel. Dorothy retired in 1981 and moved to central Florida four years later. Dorothy sang soprano in various church choirs, including 20 years at First United Methodist in Lakeland. She was a member of United Methodist Women, the Music Committee, the Best Years Council, and Circle 6. As a member of Tuesday Music Club in Lakeland she served as Recording Secretary; and she was Chapter Historian, Chaplain, and Corresponding Secretary of the AW Chapter of PEO. In her spare time, she was a member of the Lakeland Women’s Club. Dorothy loved animals and had more dogs and cats than anyone can name. In 2014, prior to moving to Florida Presbyterian Homes, she had seven cats and several dogs. Dorothy enjoyed independent living at Florida Presbyterian, eventually moving to assisted living and into Porter-McGrath Health Center. In 2021 she decided to live with her son Craig and daughter-in-law Lori in the home of Dan, who had passed away in March of 2019. Dan’s death, followed by several falls, broken bones, and the Covid pandemic, made the last few years challenging for Dorothy. But she loved to sing, and her voice lifted everyone’s spirits when she and Lori sang or traded “yoo-hoos.” A lover of travel, Dorothy visited Israel in 1979 and 1980 with Rev J. C. Powell and members of Fulford Methodist Church, and Germany in the 80s with cousins, where she met German relatives for the first time. Domestically she enjoyed driving from Florida to parts north and west, visiting family on each trip, often accompanied by one of her dogs. Dorothy loved her family. She is survived by son Craig and his wife, Lori; grandchildren Eli (wife Jamie Brenner), Nate (wife Merrill Garbus), Antonya (husband Colin Airriess), and Myriah Wallace; and great-grandchildren Norah and Audrey Brenner (daughters of Eli and Jamie) and Leonidas Brenner (son of Nate and Merrill). Dorothy was preceded in death by her parents, sister Carolyn Frick, son Dan, and former husband, Benedict Brenner. A celebration of Dorothy’s life will be held Thursday, March 17, 2 p.m., at First United Methodist Church of Lakeland (FL) Chapel, followed by interment with her father, mother, sister, and son Dan in North Miami, FL.

The family of Dorothy Frick Brenner created this Life Tributes page to make it easy to share your memories.

Send flowers to the Brenner family.