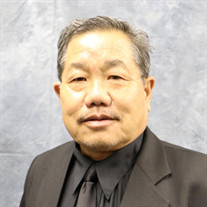 David Gnia Yang, loving husband and father of eight children, went to be with the Lord on Sunday, May 24, 2020 at the age of 68. David was born in the Xiangkhouang Province of Laos to Ntsum Tuam Yaaj and Paaj Haam. In 1969, David started his career with the Royal Laos Police until 1975 when the Laos government fell to the communist regime. While still serving as a Police Officer he married Ann (Ah) Xiong in April of 1974. David and his family fled the communist Laos Regime by crossing the Mekong River from Vientiane, Laos to a refugee camp in Nong Khai, Thailand on June 8, 1975. The following year, David relocated his family from the Nong Khai Refugee Camp to the Ban Vinai Refugee Camp in Thailand. With his wife and their two children at the time, Pao and Hue, they fled to the United States of America on August 11, 1978 and resettled in the city of Providence, RI. As the sole surviving member of his immediate family to safely arrive in the United States, David was resilient. He worked diligently to provide for his family while also serving within the Hmong community in a variety of capacities. Among notable contributions, he was a trusted advocate to transport and translate for those in need of public and/or medical assistance. God was a priority in David’s life. He served faithfully in various leadership roles within the Hmong churches throughout his life and held many positions. His love and support to the church was important. Numerous people have been impacted by his care and generosity everywhere he resided in states such as Rhode Island, Kansas, Wisconsin and Florida. David was a man of creativity and unique talents. This is reflected in his ability to troubleshoot and repair automobiles/small machines, do carpentry, and make home improvements despite any professional training. The memories and completed projects he leaves behind will be treasured. Up until his final days, David returned to his passion of farming and hunting while residing in the peaceful countryside of Florida with his loving wife. He will be remembered as having a dedicated prayer life, an infectious smile, and a kind and compassionate spirit. David is survived by his wife Ann (Ah), eight children and twenty grandchildren; son Pao and grandchildren Michael, Isaac, Jaelynn, Jolie; son Hue (his wife Mylia) and grandchildren Vanesa (her husband Blong), Alex, and Ethan; son Abraham (his wife Mai) and grandchildren Kaydence, Celeste, Coraley, and Liam; son Sue; daughter Nkaujzuag and grandchildren Ada, Arabella, Lucas, and Logan; daughter Kangbao and grandchildren Charlotte and Delilah; daughter Julie; and son Ger (his wife Panya) and grandchildren Evelyn, Eleanor, and Ezra. David was preceded in death by his father Ntsum Tuam; mother Paaj; and brother Yeng. A funeral service will be held on Saturday, June 13, 2020 at Gentry-Morrison Funeral Homes – Serenity Gardens Chapel (3350 Mall Hill Dr.) in Lakeland, FL. Visitation begins at 9:00 a.m. and service is scheduled for 11:00 a.m. Donations and gift giving may be sent to https://paypal.me/pools/c/8pqRkw6ztv

David Gnia Yang, loving husband and father of eight children, went to be with the Lord on Sunday, May 24, 2020 at the age of 68. David was born in the Xiangkhouang Province of Laos to Ntsum Tuam Yaaj and Paaj Haam. In 1969, David started his... View Obituary & Service Information

The family of David Gnia Yang created this Life Tributes page to make it easy to share your memories.

Send flowers to the Yang family.