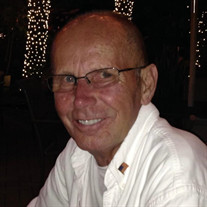 David A. Bush, 72, of Lakeland, Florida and previously of Foster, Rhode Island, passed away in the caring arms of his wife Karen on November 25, 2021. He was the beloved husband of Karen J. (Williams) Bush and the father of Kevin M. Bush who passed in 1994. He was the son of the late Walter J. and Mary Edith (Garner) Bush and the son-in-law of Doris M. (Powers) Williams and the late Charles K. Williams. He is survived by his brother Bernard T. Bush and his wife Lucille and his brother-in-law Gregory C. Williams, his wife Deena and their son Connor. Born in Providence, David was a graduate of Cranston East High School. After high school, he joined the U.S. Army attaining the rank of Sergeant and served in South Korea. After his military service, David graduated magna cum laude from Rhode Island College. He made his career in the steel fabrication industry working at the former RI Tool Company and then as general manager at both St. Pierre Manufacturing in Worcester, MA and at Commercial Metals Corporation, Orlando, FL. Family, friends and neighbors will remember David for his subtlety mischievous sense of humor, his willingness to take on a good political debate, his stain glass creations and for his gardening skills to name just a few but most notably, they will never forget his remarkable innate resourcefulness at solving problems that came to his door. His home workshops in Foster and Lakeland were magical places where David used his ingenuity to fix and repair things be it mechanical, furniture and more for anyone who asked for his help. These memories will pale however in comparison to his kind and giving nature to help people he did not know, whether it was a stranger stranded on the road with car problems or a family in need at his church. Those times, done without expecting anything in return, are a testament to the stature of the man David was. David and Karen met in 1976 and were married for 45 years. Throughout the years together, it was their faith in God and their love for each other that carried them through life’s unexpected moments, experiences that would challenge even the strongest among us. Karen once said, “Life’s challenges can tear a couple apart or can bring them closer together. In our case, every challenge we faced, brought us closer and made our love stronger.” David, who will be reunited with his son Kevin in heaven, lived his life with kindness and love as his compass. He was a source of inspiration to all who knew him but especially to his wife Karen. He will be missed by family and friends and by his faithful companion, their yellow lab Maggie. Karen wishes to acknowledge everyone in their circle of life who provided support, caring and help in ways too many to name in this short space. She invites you to a Mass of Christian Burial at St. Joseph’s Church, 210 W. Lemon Street, Lakeland FL on Dec 2nd at 1:30 pm. To honor David, please consider a gift in his memory to Tunnel to Towers, a charity assisting first responders and veterans. Tunnel to Towers, 2361 Hylan Blvd. Staten Island, NY 10306 or online at t2t.org or to the charity of your choice.

David A. Bush, 72, of Lakeland, Florida and previously of Foster, Rhode Island, passed away in the caring arms of his wife Karen on November 25, 2021. He was the beloved husband of Karen J. (Williams) Bush and the father of Kevin M. Bush... View Obituary & Service Information

The family of David A. Bush created this Life Tributes page to make it easy to share your memories.

David A. Bush, 72, of Lakeland, Florida and previously of Foster,...

Send flowers to the Bush family.