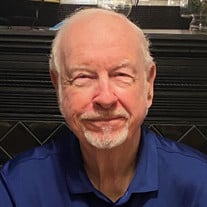 Daniel Dilts Baldry died peacefully at his home on February 1, 2022, while surrounded by his family as “How Great Thou Art” filled the room. He was 77. Born in 1944 in Rising Sun, Indiana, to Robert and Velma (Dilts) Baldry, he grew up with a deep love of sports that later turned into a lifelong career as a physical education teacher and coach. Dan, or “Danny,” as he was known to friends and family, followed the real-life “Hoosiers” team from Milan as a young boy, both courtside and on the radio. He scored the autographs of many of baseball’s greats as a young Cincinnati Reds fan and followed them down to spring training in Florida after his family moved to Tarpon Springs when he was in the eighth grade. Dan lettered in baseball and basketball at Tarpon Springs High and graduated from the University of Tampa with a degree in education. He lived in coaching shorts and a hard-collared polo for his entire adult life, wearing a hole in same spot of every pair of Thorlo socks he ever owned. Dan met his Hoosier bride, Wanda Jean Graves, in Lakeland, Florida, where both worked as elementary school P.E. teachers. They would later move up to the junior high level, with Dan coaching football, basketball and golf. Coach Baldry loved all his athletes, but none more than his only child, Beth Ann (Nichols), who spent countless hours on the driving range with her father searching for answers. A Ben Hogan devotee, Dan could often be found breaking down the golf swing with friends or breaking down his own clubs in the garage. He was a builder at heart, whether it was his beloved mountain house in Murphy, North Carolina, his many hybrid clubs or whatever project his wife and daughter dreamed up. He was generous with his talents and could fix just about anything. Dan retired from Polk Country schools after a 30-year career and enjoyed traveling across the country to tee it up with his daughter. Only his wedding day and the birth of Beth Ann could top the family trip to Pebble Beach. He also liked to bass fish and rev up his Pontiac GTO Judge. Dan likely watched every episode of “Bonanza” and “Gunsmoke” at least 10 times. His coaching voice was loud and gruff, but his heart was big and soft. He adored the family Bassett Hounds: Ladybug, Bashful, Bertha and Bernice. Dan loved the Lord and looked forward to reuniting with family in heaven. He was preceded in death by his parents and older brother, David. His is survived by his loving wife of more than 50 years, Wanda, and their daughter, Beth Ann, and son-in-law, Benjamin Nichols. A Celebration of Life will be held February 11, 2022, at 10 a.m. at Gentry Morrison Funeral Home at 3350 Mall Hill Dr. in Lakeland. The family asks that memorial gifts be sent to Global Golf, a ministry that supports those involved in collegiate and professional golf: https://www.globalgolforg.org

The family of Daniel Dilts Baldry created this Life Tributes page to make it easy to share your memories.

Daniel Dilts Baldry died peacefully at his home on February 1,...

Send flowers to the Baldry family.