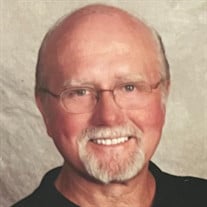 Dale William Nelson, age 77, passed away peacefully at his home in Lakeland, Florida on January 12, 2022. Dale was born December 4, 1944 in Red Wing, Minnesota to Victor Nelson and Evelyn (Cordes) Nelson. Along with his parents, he was preceded in death by his brother, Orlin V. Nelson and son-in-law, Clifton Cook. He is survived by his loving family including his wife, Lauriel (Christopherson) Nelson, daughter, Briana and son, Ross. His professional accomplishments include being the first in his family to attend college and receive a bachelor’s degree from St. Cloud State University. He continued his education by receiving his certified financial planner degree (CFP) from the National Institute of Financial Planning. Dale had a long and successful career in financial management, serving as Chief Financial Officer at Golden Plump Poultry; and later becoming President and CEO of Liberty Savings Bank in St. Cloud, MN. Throughout his professional years, Dale played an active role in the Chamber of Commerce and the St. Cloud Downtown Development Council. The titles that meant the most to Dale, however, were that of husband, father, and fisherman. Dale and Laurie were married for 49 years and successfully survived raising two kids through the teenage years into adulthood. He taught Briana and Ross how to ride a bike (into a pine tree), create a budget (which they didn’t listen to) and how hard work pays off (they follow this every day). If there was water nearby, you could always find Dale trying to catch the “biggest bass you’ve ever seen!”. “There are always new places to go fishing. For any fisherman, there’s always a new place, a new horizon.” – Jack Nicklaus Gone fishin’… A Celebration of Life will be held in the future in both Lakeland, FL and Red Wing, MN. In lieu of flowers memorials are preferred to The American Cancer Society or Good Sheperd Hospice of Lakeland.

Dale William Nelson, age 77, passed away peacefully at his home in Lakeland, Florida on January 12, 2022. Dale was born December 4, 1944 in Red Wing, Minnesota to Victor Nelson and Evelyn (Cordes) Nelson. Along with his parents, he was preceded... View Obituary & Service Information

The family of Dale William Nelson created this Life Tributes page to make it easy to share your memories.

Dale William Nelson, age 77, passed away peacefully at his home...

Send flowers to the Nelson family.