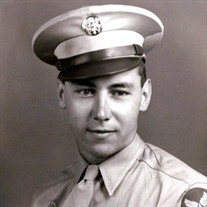 Conrad Mertely passed away on January 8, 2021 at the age of 97 at Lakeland Regional Hospital, Lakeland, FL. He was born on May 4, 1923 in Eveleth Minnesota to Andrew and Anna (Longar) Mertely. He attended the Eveleth school system followed by Junior College. After graduation he worked in a variety of jobs, including a roofing factory, Curtis Candy Company, Montgomery Wards, and as a welder for ship fabrication. In 1943 he enlisted in the Army Air Corps and served as a weather observer at Camp Blueberry in northern British Columbia. When he left the Air Force in 1946, he went to the University of Minnesota, Duluth and graduated with a degree in business and education. After graduation he took a job teaching business classes in Butterfield, Minnesota. Next, he took a job as county assessor for St Louis County and subsequently served as county clerk and registrar. During the summers, he worked in the iron ore mines as a welder and heavy truck driver. Conrad was hired as an accountant for the Pittsburg Pacific group of companies and worked at the company for 33 years. He also served as Secretary of the Pacific Foundation, a foundation established for distributing charitable contributions. On August 5, 1950, he married Ann M (Krivich) Mertely. In 2003 they pulled up stakes from northern Minnesota for the warmer climate of Central Florida. Conrad and Ann were married for 61 years until Ann passed away in 2011. Conrad is survived by his 4 children, James (Maria), Bonnie, Daniel (Errin), Michael (Melissa) and 5 grandchildren, Brian, Melissa (Tyler), Paige, Kira and Tara. His last surviving sibling is his brother Charlie in Montello, WI. Conrad was a longstanding member of Resurrection Catholic Church in Eveleth and St. Joseph’s in Gilbert, Minnesota. He was also a member of the Eveleth Senior Citizen's Club. After moving to Lakeland he and Ann became members of St. Joseph Catholic church locally. He was one of the last of the Greatest Generation. He believed in God and Country, family and hard work. He was an amazing father and friend to many. He will be sorely missed by all of us. A memorial service will be held at Gentry-Morrison Funeral Home (Bartow Road) in Lakeland on January 19, 2021 at 10 am, followed by interment at Florida National Cemetery, Bushnell, Florida at 1:30 pm.

Conrad Mertely passed away on January 8, 2021 at the age of 97 at Lakeland Regional Hospital, Lakeland, FL. He was born on May 4, 1923 in Eveleth Minnesota to Andrew and Anna (Longar) Mertely. He attended the Eveleth school system followed by... View Obituary & Service Information

The family of Conrad A. Mertely created this Life Tributes page to make it easy to share your memories.

Send flowers to the Mertely family.