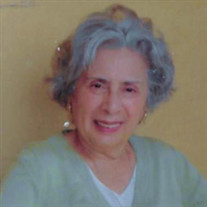 Clara Greene of Lakeland passed away October 24, 2020, after a long life devoted to her faith in the healing power of Jesus Christ. Clara was born in Brooklyn, NY, on May 5, 1927. She is preceded in death by her husband, Robert Greene, and by her parents, brothers and aunt. A talented musician and composer, Clara performed at Carnegie Hall at age 15 and won a John D. Ryan Scholarship to Manhattanville College of the Sacred Heart. She also attended Dutchess Community College where she continued her study of music. Later Clara served in the business world as secretary for several enterprises in both New York and Miami, though she never gave up her love and pursuit of music. In 1979, after a life-transforming healing by Jesus Christ, “Who is the same yesterday, today and yes, forever,” (Hebrews 13:8), she went on to serve her Lord for 23 years as a church musician. In this capacity, Clara played organ, piano and accompanied herself as a soloist, when needed. She was also a song leader, and as soloist, she was honored to sing the Exsultet three times at Easter Vigil masses. Clara composed eight compositions, which were copyrighted in 1981. Moving to Lakeland with her husband in 1998, Clara continued her musical career at various local churches, most notably, St. Joseph and St. John Neumann. She was also an active member of the Healing Arts team at Lakeland Regional Hospital and Cancer Center as a pianist and was a minister to the sick at the hospital. She was His instrument and happy to be His, her ultimate destination. Clara is survived by a host of nieces, nephews, and cousins in Marseilles and Montpelier, France. Visitation will be Monday, November 9th from 5-7 pm, with a 6 pm Rosary at Gentry Morrison Serenity Gardens Chapel, 3350 Mall Hill Dr. Lakeland, FL. A funeral mass will be conducted Tuesday, November 10th at 10 am at St. Joseph’s Catholic Church. Burial services will be at Union Cemetery in Hyde Park, NY, where she will be buried near her husband and mother. Many thanks to the people at Brighton Gardens of Tampa who cared for her so much over the past several years and to the LifePath Hospice team providing additional care this past year. In lieu of flowers, we invite you to make a contribution to St. Joseph Catholic Church, 210 W. Lemon St., Lakeland, FL 33815 to benefit the music ministry in her name to recognize her commitment to her faith and her passion for music.

Clara Greene of Lakeland passed away October 24, 2020, after a long life devoted to her faith in the healing power of Jesus Christ. Clara was born in Brooklyn, NY, on May 5, 1927. She is preceded in death by her husband, Robert Greene, and... View Obituary & Service Information

The family of Clara Greene created this Life Tributes page to make it easy to share your memories.

Send flowers to the Greene family.