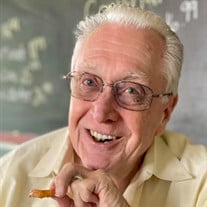 Clair Bressler of Lakeland, Florida passed away on Tuesday, September 28, 2021, at the age of 86. After several months of declining health, Clair died peacefully with his wife, Joy and his children by his side. Clair was born in Tower City, PA on March 25, 1935 to Howard Bressler and Erma (Snyder) Bressler. Clair was preceded in death by his beloved sister, Joan (Bressler) Fidler. A carpenter by trade, Clair was a graduate of the Williamson Free School (Class of ’55). Clair was preceded in death by his first wife, Jean (Bixler) Bressler. Clair and Jean were married in 1955 and had two sons. They made their home in Media, PA for over 50 years. Clair and Jean worked very hard to save and plan a retirement full of travel and adventure. They took many wonderful trips together before Jean got ill. Jean and Clair were married for 54 years. Clair is survived by two sons: Thomas Bressler and Timothy Bressler; four grandchildren: Justin Bressler, Erin Bressler, Ashton (Bressler) Miller, Rachel (Bressler) Kelly; and five great-grandchildren: Alexander Tolvasa, Olive Bressler, June Bressler, James Kelly, and Simon Miller. Clair is survived by his loving wife, Joy (Sadler Wilson) Bressler. Clair and Joy shared a beautiful marriage and companionship for over 9 years. Joy brought a lot of light and love into Clair’s life at a time when he needed it most. In his marriage to Joy, Clair gained another large, loving family. He is survived by Joy’s four children: Sharon (Wilson) Heym, Deanna (Wilson) Nelson, Rob Wilson, and David Wilson; twelve grandchildren: Blake Heym, Jake Heym, Kyle Heym, Christopher Nelson, Sam Nelson, Caroline (Nelson) Kreger, Elizabeth Wilson, Thomas Wilson, Robert Wilson, Natalie Wilson, David Wilson, and Jeaneane (Wilson) Pennell; and three great grand-children: Lexi Pennell, Wilson Pennell, and Harper Pennell. Clair was preceded in death by Joy’s grandson, Benjamin Nelson. Clair was an avid fisherman and took countless fishing trips with his family and friends over the years. He did an enviable amount of traveling in retirement, seeing National Parks and landmarks all over the U.S and Canada. He also had an unrelenting sweet tooth; One could regularly find him with an ice cream cone in his hand. Clair loved playing Hand & Foot and was also everyone’s favorite Pinochle partner. A service is scheduled for October 23, 2021 in Pine Grove, PA at Jacobs Lutheran Church (316 Suedberg Road, Pine Grove, PA 17963). The service will begin at 11AM. All family and friends are invited to a dinner reception following the service. The dinner location is being determined and details will be provided at the service. A private burial service (at the Muir cemetery) will be scheduled for later that afternoon. In lieu of flowers, the family requests that donations be made to Williamson College of the Trades (106 S. New Middletown Road, Media, PA 19063) or the Jacobs Lutheran Church (316 Suedberg Road, Pine Grove, PA 17963). Both Clair and his two sons are graduates of Williamson. Clair and Joy were married at Jacobs Lutheran.

Clair Bressler of Lakeland, Florida passed away on Tuesday, September 28, 2021, at the age of 86. After several months of declining health, Clair died peacefully with his wife, Joy and his children by his side. Clair was born in Tower City,... View Obituary & Service Information

The family of Clair Bressler created this Life Tributes page to make it easy to share your memories.

Clair Bressler of Lakeland, Florida passed away on Tuesday, September...

Send flowers to the Bressler family.