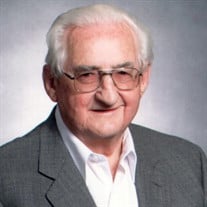 Charles Lester Kempf, 95, Navy WWII Veteran Charles (Les) passed away at home in Lakeland, Florida on Friday, March 25th. He was the son of Walter Freeman & Lucile (Miller) Kempf of Holton, Michigan. “Charlie” was the 7th of 7 boys with whom he worked on the family farm until leaving high school to join the Navy where he was stationed in the Pacific during World War II. Upon returning from his tour of duty, he lived in Fremont, MI and drove fruit trucks for Gerbers until he began working in the dry cleaning business--first in Fremont and then in Muskegon, Michigan. He received the Lord as His Savior on Veteran’s Day, 1948. He became active in his church and grew as a Christian. He married Sally Miller in 1951 and they headed to Maryland where he studied dry cleaning management. He owned and operated a Dry Cleaning business in Jackson, MI until he sold it to move to Illinois where he sold real estate until being introduced to Baby Mate furniture. He sold Baby Mates for many years. He moved his family of 7 to Michigan where he continued to sell Baby Mates until he became a real estate broker at Kempf Realty, which later became Century 21 Kempf Realty in Fremont, MI. He “retired” and went on to own & manage a mobile home park in Lakeland, FL and later one in Bryson Circle Park in Franklin, NC.His favorite thing was talking about his Lord and Savior to all who would listen. He enjoyed visitation and carried tracts to hand out to anyone he crossed paths with during his day. One of his family’s fond memories was his reading of the Bible and having family devotions every morning. Charles faithfully served the Lord in church visitation and as a deacon and treasurer in various churches his family attended. He was one of the founders of Faith Baptist Church in Fremont, Michigan. He is survived by his 5 children, Dr. Charles A. (Ruby), Dr. Craig L. (Jamie), Betsy K. Levingston, Susan M. Tarr (Kerry), Donna J. Watkins (Bob); 17 grandchildren; 31 great grandchildren and many nieces and nephews. He is preceded in death by his parents, his loving wife of 68 years, Sally C. (Miller) Kempf and his 6 brothers. His family is comforted knowing he had accepted Jesus Christ as his personal Savior and served Him faithfully, and they look forward to seeing him in heaven again someday.

The family of Charles Lester Kempf, Navy WWII Veteran created this Life Tributes page to make it easy to share your memories.

Send flowers to the Kempf family.