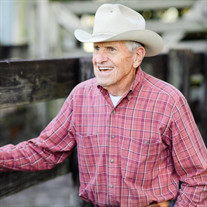 Charles Donald “Harden peacefully passed away on December 1, 2020. Don was born in and resided his whole life in Lakeland. He was a southern gentleman, a classic personality, and a friend to many. Don was raised on the family ranch in west Lakeland, which is now Oakbridge and surrounding areas including Harden Blvd. Catherine, his loving wife of 57 years, and Don raised a family of 4 children, 13 grandchildren, and 22 great-grandchildren. Don attended Medulla Elementary (where is mother was the principal), Southwest Junior High, Lakeland High School and Kathleen High School (all while his father was Superintendent). After graduating he attended South Georgia State College and returned from SGSC to run the ranch. After the ranch was sold Don worked in agricultural feed and equipment sales traveling and making countless friends across the southeastern US. In mid-life, he made a career change into real estate, working for Higginbotham Auctioneers, then later for Land South and AgAmerica. Don loved God, his family, his friends, and agriculture. Friends and business associates always depended on him to be in pressed shirt and pants, wearing his signature brim cowboy hat, bearing a smile on his face, and giving a warm word in conversation. He regaled all with witticisms, old stories, and agricultural trivia. He always remembered a name and a face, and rare was the area in the south that he did not have a friend. Family and friends knew Don to be loyal and dependable. He would be there to pray, talk, work and defend at any time of need. Don was preceded in death by his brother, Claude M. Harden, Jr.(Mac) Survivors include his wife, Catherine; sons, Ty (Kam) Harden, Brian (Susan) Harden, Justin (Patty) Harden; daughter, Cindy Harden; brother, Ben Harden; sisters, Angel Sell, Carrie Harden; grandchildren, Tyler, Kaylee, Jessica, Josh, Jami, Taylor, Madison, Danielle, Paige, Miranda, Dustin, Leann, Elizabeth; 22 3/4 great grandchildren. A memorial service will be conducted at Victory Church, Friday Dec. 4th at 2 pm.

Charles Donald &#8220;Harden peacefully passed away on December 1, 2020. Don was born in and resided his whole life in Lakeland. He was a southern gentleman, a classic personality, and a friend to many. Don was raised on the family ranch in... View Obituary & Service Information

The family of Charles Donald Harden created this Life Tributes page to make it easy to share your memories.

Send flowers to the Harden family.