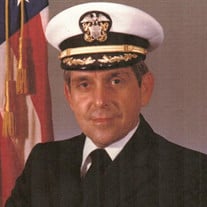 Captain William Frederick Wiggins , USN(ret) William “Fred” Wiggins, 81, passed away on July 6, 2021. He was born on January 4, 1940, in Mobile, Alabama. Fred received a Bachelor of Science degree in Physical Science (Chemistry/Physics) from Livingston University in 1962. He then completed Officer Candidate School in Newport, RI, and was commissioned an Ensign in 1963. His military education included many and varied courses including Aviation Maintenance. He earned his Naval Flight Officer’s wings in 1964. He then began a series of assignments including Flight Officer in Airborne Early Warning Squadron Thirteen and was then honored by being selected as one of the original one hundred into the newly established Aeronautical Engineering Duty Officer Community (Aviation Maintenance). Fred was honored to serve as Maintenance Officer for the renowned Navy Flight Demonstration Squadron (Blue Angels ). This was one of his toughest and most memorable assignments He then served as Chief of the Systems Engineering Division of the Navy’s Defense Logistics Agency ( Contract Management Directorate). Among his military decorations were the Meritorious Service Medal (with gold star), Meritorious Unit Citation ( with two stars), National Defense Medal and the Sea Service Medal(with star). In 1971 Fred was nominated as one of the Outstanding Young Men of America by his alma mater, Livingston University. He retired from the military in 1991, having served his country faithfully for over 28 years, and moved from Burke, VA to Lakeland, FL. He met his wife, Dona, at an airshow (not surprising) in Rhode Island. They married May 7, 1977, in Front Royal, VA. Fred was a history buff-especially the Civil War. He loved fishing and was a former member of Lakeland Bassmasters. He was a member of Masonic Lodge No. 356, Neptune Beach, FL, having been initiated into Berkley Lodge No. 167 A.F. & A.M., Chesapeake, VA in 1981. He was an active member of All Saints’ Episcopal Church since 2000 and will be warmly remembered for many years as the organizer of the Lunch Bunch at the church. Fred was predeceased by his parents, Ted and Irene Wiggins and sister Barbara and brother-in-law Robert McConnell. He is survived by his wife Dona and son Donald; Niece, Debbie (Henry) Jones; Great Nieces, Amber(Chris) Shirley, Amanda (Joe) Sanders and Jaelyn Huffman; Great-Great Nieces Kaileigh, Kennedy and Camdyn Shirley, Addison Spoma and Great-Great Nephew Ethan Farish. A memorial service will be held on Saturday, July 17, 2021 at 10 AM at All Saints’ Episcopal Church. The service will be livestreamed on the church’s Facebook page and website: www.allsaintsweb.org . Burial will be in Virginia. In lieu of flowers, donations may be made to All Saints’ Episcopal Church Memorial Fund, 209 S. Iowa , Lakeland, FL 33801 or to Good Shepherd Hospice, 3450 Lakeland Hills Blvd, Lakeland,FL 33805

The family of Captain William Frederick Wiggins, USN (ret) created this Life Tributes page to make it easy to share your memories.