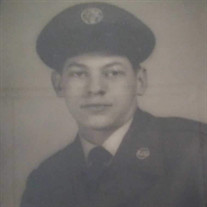 Burton (babe) Ducharme passed away on January 4, 2022, at Lakeland Regional Hospital in Lakeland, Florida, where he had lived since 2002. Burton lived in the Upper Valley most of his life. He proudly went into the Air Force on April 26, 1952, as a jet engine specialist during the Korean War. He was deployed to serve in Africa and in London the day after Queen Elizabeths coronation. He was discharged on January 24, 1956. After leaving the service he worked on steel construction for some time. He went on to work at Dartmouth college as grounds keeper, he was employed by Robert McCoy as maintenance supervisor for many, many years, and when Robert retired the company was bought by Mr. William Drake, and Babe loyally went with him. He diligently worked there until the day he retired. His passion was woodworking, and with that passion and talent he built many things. He also loved fishing, and the many bus trips he and Kathy went on. Burton is survived by his adoring wife Katherine Ducharme (nee' Osmer), and by his loving children; Roy Ducharme (Cheryl), Joseph Ducharme, Susan MiIler (Gary). Ronald Ducharme, Sheila Clayton (Gary), Lisa Soltesz (Andy), Neko James, and Jack Trevelt. His Grandchildren Michael Ducharme, Shane Dunham, Tashina Clayton, Kayla Clayton, Nora Cole, Bradley Clayton, Tyler Miller, Cole Miller. His beloved Great Grandsons; Kiedis Bissonnette, Chance James (and his former wife Joan Ducharme). Babe was predeceased by his two daughters Sharon Ducharme, and Robyn Stephens, along with a son Kenneth Stephens, and a Granddaughter Kelly Stephens Whitford. Babe was also predeceased by 9 siblings, Peter, Gordon, Leo, Gertrude, Irene, Wanita, Lorraine, Virginia, and Phyllis. There will be a funeral service in White River Junction with a burial to follow in West Lebanon New Hampshire in the Spring.

Burton (babe) Ducharme passed away on January 4, 2022, at Lakeland Regional Hospital in Lakeland, Florida, where he had lived since 2002. Burton lived in the Upper Valley most of his life. He proudly went into the Air Force on April 26, 1952,... View Obituary & Service Information

The family of Burton Leonard Ducharme created this Life Tributes page to make it easy to share your memories.

Send flowers to the Ducharme family.