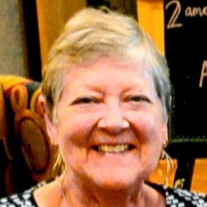 Brenda Kay (Davis) Gaidmore, 73, a resident of Milford, NH and Lakeland, FL, devoted wife and loving mother, died on June 9, 2020 in Lakeland after a short bout of cancer. She was born in Owensboro, KY on March 26, 1947, the youngest daughter of Pascal and Nan (Heisler) Davis. She graduated from Owensboro High School in 1965 and attended Kentucky Wesleyan College in Owensboro, KY where she met her husband of 52 years, Jerry Gaidmore. On October 14, 1967, she married Jerry Gaidmore while he was serving in the military at Fort Stewart, GA. After living in Hinesville, GA and the birth of their first child, Kelly, they made Milford, NH their home for the next 51 years. She was primarily a homemaker, keeping an immaculate home and enjoying taking care of her husband and children. For many years, she served as an EMT for the Milford Volunteer Ambulance Service and worked at the Milford Fire Barn. Over the last sixteen years, she split her time between Milford and Lakeland. She was an avid reader and a frequent patron of the Wadleigh Memorial Library, and passed on her love of reading and books to her children. She loved sports, especially college basketball and March Madness, and enjoyed watching the Boston Red Sox and the New England Patriots. Her favorite part of playing golf was eating out afterwards, although she did get a hole in one before her husband. Her parents predeceased her. In addition to her husband, surviving family members include her daughter, partner, and granddaughter, Kelly Gaidmore and Quinn Bagola of Owensboro, KY, and Bradlee Valandra of Lexington, KY, her son, daughter-in-law, and grandson, Jay, Amy and Max Gaidmore of Toano, VA, a sister and brother-in-law Jim and Janet (Davis) Dillard of Owensboro, KY, and uncles, aunts, nephews, and cousins. Funeral services are private. Interment will be in Owensboro, KY. To share a memory or offer a condolence, please go to www.gentry-morrison.com.

Brenda Kay (Davis) Gaidmore, 73, a resident of Milford, NH and Lakeland, FL, devoted wife and loving mother, died on June 9, 2020 in Lakeland after a short bout of cancer. She was born in Owensboro, KY on March 26, 1947, the youngest daughter... View Obituary & Service Information

The family of Brenda Kay Gaidmore created this Life Tributes page to make it easy to share your memories.

Send flowers to the Gaidmore family.