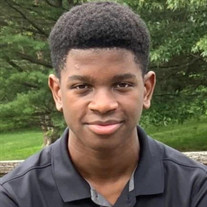 Bailey Bernard Bullock, aka Bubbles, Ashy, Spiderman, Trooper, Bailes, 16, died suddenly on May 12th, 2021, in his hometown, Bel Air, MD, surrounded by his family. Bailey was born on January 14th, 2005, in Baltimore, Maryland at Sinai Hospital to Patrice and Bernard Bullock. Bailey attended Ring Factory Elementary School and Patterson Mill Middle School. While in middle school, Bailey was an avid athlete. He first started playing flag football at Fallston Recreational Center. This grew his love for football as he later became a key player for the Bel Air Terps during his team’s championship run to the 2017 Championship Finals where they were runner ups. Bailey served in many positions, but he really enjoyed playing in the wide receiver position. He emulated other football players such as Russell Wilson, Marshawn Lynch, Richard Sherman, and Tyler Lockett. He really enjoyed studying film and techniques to become a better player. During the off season, Bailey played basketball with Bel Air as well. He loved to stay active and to compete. Bailey then set his eyes on attending John Carroll for his academic and athletic career. He was so excited to be admitted into the Class of 2023. He pushed himself to excel academically. Bailey’s grades were always all A’s and two B’s. At John Carroll, Bailey played football, basketball, and ran track. In his free time, he worked on building his computer, volunteering at Balmaine Manor Assisted Living, becoming a better athlete, playing video games with his friends, and most of all spending time with his family. Bailey is survived by his brothers, Benjamin and Brandon, his sister, Breanna, mother Patrice, father Bernard, stepdad Donovan, and beloved cat, Chewy, along with his maternal grandparents Josiah and Merline Smith, his paternal grandmother Shirley Bullock, as well as a host of cousins, aunts, uncles, friends, and coaches. He joins in resting with his paternal grandfather Joseph Bullock. He will be remembered as a passionate Seahawks fan and an exceptional young man known for his intelligence, witty jokes, smile, kind spirit, warm presence, passion and knowledge for sports, trivia, and geography. He will be dearly missed and remembered for being the ultimate teammate, competitor, and Mommy’s dancing partner. We love you Bubbles. Relatives and friends are invited to visit at Schimunek Funeral Home of Bel Air, Inc., 610 W. MacPhail Rd. Bel Air, MD 21014, on Thursday, May 20, 2021 from 5-7 PM. A Funeral Service will be held on Friday, May 21, 2021 at 11:00 AM at Bethel United Apostolic Church, 2301 Mayfield Ave. Baltimore, MD 21213, where a visitation will be held at the church from 10 AM-11 AM. A repass will follow at 2 PM. Interment will take place at Serenity Gardens in Lakeland, Florida on Wednesday, May 26th at 10 am.

The family of Bailey Bernard Bullock created this Life Tributes page to make it easy to share your memories.

Send flowers to the Bullock family.