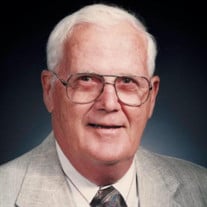 Austin Hamilton Jensen was born on April 25, 1929 in Niagara, NY. He was called home by his Lord and Savior on November 14, 2021 surrounded by his family in Hendersonville, NC. Austin lived his early years in Sanborn, NY with his parents, Carl P, Jensen and Eria Parker Jensen. He had two older brothers Douglas Parker Jensen and Carl P. Jensen Jr. His family enjoyed living in Sanborn, NY where he attended school and watched his two brothers depart to serve in the Army Air Corps and U.S. Army during World War II. Shortly after the end of the war and the safe return of his brothers back home, his entire family decided to seek warmer weather and relocated to Dundee, FL. Where Austin helped his father build the family home. Austin and his family became members of Dundee Baptist Church. Austin was very musical talented playing piano, accordion, saxophone, harmonica, and banjo. He was very sociable and the life of any party. He played piano regularly for the church along with singing in the choir. He is a graduate of Haines City High School, where he lettered in Football, Baseball, and Basketball. While attending Florida State University, Austin received his draft notice and was inducted into the U.S. Army on January 10,1951 to serve during the Korean War. He was Honorably Discharged on January 9, 1953 after serving two years. Austin returned home safely to his family and church where he worked alongside his father and brother “Junior” at the family owned “Jensen Supply”. A building supply company that sold lumber, did mill work, and cabinetry located in Dundee, FL. Austin became a highly sought out wood worker and carpenter while working with his father and brother. Being a man of varied interests, Austin became a private pilot in the 1960s. He was an avid golfer, he coached little league baseball, played men’s softball, he liked being in the outdoors hunting and fishing. He could never walk past a piano without stopping to play it. He always played an encore. Most of all he enjoyed his church and directing the church choir. It was at Dundee Baptist Church where he met his wife to be, Joyce Lovell. While Austin played the piano and directed the choir; Joyce played the church organ. Many practice sessions ensued together and so began a romance that led to a long loving marriage. Austin worked for many years as a carpenter and cabinet maker. He eventually landed a job with Walt Disney company and assisted Walt in the building of Walt Disney World and left the company upon the completion of the Magic Kingdom. He continued in the building industry and built the Dundee Baptist Church parsonage in 1975. Shortly after building the parsonage he was recalled by the Walt Disney company to work on the construction of Epcot, and the other Disney Parks. He continued to work there in the finish shop for better than 20 years before retiring. Austin and Joyce spent their retirement years traveling visiting their friends, family, children, and grandchildren. They bought a vacation home in Almond, NC and spent many of their summers there. For many years they were on the constant move and loved traveling together. They had a wonderful life together and after a while, health problems limited their movements and Austin lost his beloved Joyce to cancer in 2015. After losing his wife, Austin’s health started to decline so the family decided to move Austin close to his eldest son Mark Jensen in Hendersonville, NC to overlook his father’s care in an Assisted Living/ Memory Care facility where Dementia and Alzheimer’s patients are cared for. Austin was preceded in death by his parents, his brothers, and his wife, Joyce Lovell Jensen. He is survived by his three sons; Mark D. Jensen(Deb), Robert “Kirk” Jensen (Maria), David F. Aplin (Connie), his daughter “Baby Girl” Ingrid Jensen Hoover (Bryce), along with many grandchildren and one great grandchild.

Austin Hamilton Jensen was born on April 25, 1929 in Niagara, NY. He was called home by his Lord and Savior on November 14, 2021 surrounded by his family in Hendersonville, NC. Austin lived his early years in Sanborn, NY with his parents,... View Obituary & Service Information

The family of Austin Hamilton Jensen created this Life Tributes page to make it easy to share your memories.

Send flowers to the Jensen family.