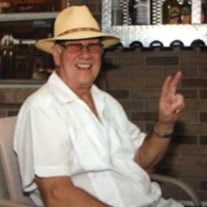 Arthur (Artie) Anderson passed away February 7, 2022 in Lakeland, Florida. He was born on March 4, 1947 in Chicago, Illinois. Artie was preceded in death by his father, Arthur Gunnar (Slim) Anderson, his mother Mary Ivancevich Anderson, and his brother Richard (Spunky) Anderson. He is survived by his sister Barbara Sotos, brother-in-law Peter Sotos, nephews Christopher Sotos, Kenneth Anderson, Daniel Anderson and niece Krissy Powledge, sister-in law Ann Anderson, Aunt Virginia Ivancevich, 9 great-nieces and nephews, and many cousins. Artie grew up on the south side of Chicago. He attended John L. Marsh Elementary School, Bowen High School, and spent his college years at Southern Illinois University Carbondale. After college he spent most of his life in South Chicago where he worked as a machinist for General Mills. When he wasn’t working, you would most often find him singing with his band and performing all around the Chicago area. He was quite the entertainer, with a boisterous and magnetic stage presence, and he was well known by many who adored him. After retiring from his job at General Mills, he eventually moved to Lakeland, Florida where his parents and many of his extended family lived. After his dad passed away and his mother was dealing with health issues, Artie took on the responsibility of caring for his mother for many years until she passed away at the age of 98. For those of you who knew Artie, you know that he had a heart bigger than he was, and he was a big guy. He never met a stranger, and because of that he amassed many friends from Chicago, Florida and around the country. Artie was always the life of the party, which explains why many of his friends and family referred to him as “Party Artie”. He loved people of all kinds. It never mattered to him if you were a CEO of a large corporation or a homeless person living on the street. He was kind to everyone and never turned down a conversation. His ability to laugh and enjoy life was a gift to everyone who knew him. His presence on earth will be missed by so many, but he will never be forgotten. There will be no memorial services for Artie. Instead, he would want all of his friends and family to remember him with a smile, a laugh, or a funny story that he might have shared with you. We can all honor his memory in our own special way. Extend a hand to someone in need. Smile at a stranger who might be struggling to make it through the day. Enjoy each day as if it were your last. Drink a beer in honor of the man we all knew and loved, and share your stories about him that would make people smile and laugh. He would be honored by everyone’s joy.

Arthur (Artie) Anderson passed away February 7, 2022 in Lakeland, Florida. He was born on March 4, 1947 in Chicago, Illinois. Artie was preceded in death by his father, Arthur Gunnar (Slim) Anderson, his mother Mary Ivancevich Anderson, and... View Obituary & Service Information

The family of Arthur "Artie" Anderson created this Life Tributes page to make it easy to share your memories.

Send flowers to the Anderson family.