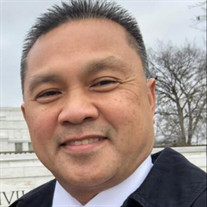 Ariel Bautista Alonzo, passed away peacefully in his home on Sunday October 10, 2021. Relatives and friends are invited to visit The Church of Jesus Christ of Latter-day Saints, 5850 Lakeland Highlands Rd, Lakeland, FL on Monday October 18,2021 at 9am. The funeral service will commence after the viewing at 10am. Ariel Bautista Alonzo was born in Marikina, Philippines to Odon Alonzo and Ester Bautista Alonzo, on November 23, 1962. He did his studies in the Philippines and graduated high school at Roosevelt College Lamuan. He grew up mostly in the Philippines and then moved to the United States 1979. Ariel was a man of God. He went to church every Sunday and devoted himself to serve God and his fellow beings. He served a church mission for The Church of Jesus Christ of Latter-day Saints in the Bacolod, Philippines mission teaching people the gospel from 1989-1991. He married Maila Leilani Bala (Acampora) and later remarried to Elel Unica Alonzo on December 7, 2002. He was a hard working man who worked for Nissan for 24 and a half years and recently retired from Nissan and moved to Florida to be closer to his mother and other relatives. He also started working at Hawthorne Gardening by Scott’s Miracle Grow for six months. He was a hilarious man who loved to make jokes and do the typical dad joke of “pull my finger.” If he saw you picking your nose he would jokingly say , “digging for gold up there?” He was loved by his family and by many friends as well. Ariel was predeceased by his father Odon Alonzo and his siblings Armando Alonzo, Alberto Alonzo, and Maria Teresa Alonzo. He is survived by his wife Elel Alonzo and five children Adrian Myles Bala Alonzo, Andrew Bala Alonzo, Ethan Unica Alonzo, Enzo Unica Alonzo, Athena Isabelle Unica Alonzo, and his grandchild Kotah Wonder Alonzo and his mother Ester Bautista Alonzo.Out of his siblings survived Rolando Alonzo, Celso Alonzo, Elisa (Alonzo) Mendoza, Erlinda (Alonzo) Bernardo, Sherri Alonzo, and Corazon (Alonzo) Navalta. He will be deeply missed by all his family and friends around the world

The family of Ariel Alonzo created this Life Tributes page to make it easy to share your memories.

Ariel Bautista Alonzo, passed away peacefully in his home on...

Send flowers to the Alonzo family.